IQ and Image Reject or Single Sideband mixers use similar circuitry to solve two different fundamental problems in communications and signal processing. IQ mixers address the problem of maximizing information transmission by allowing the user to modulate both the in-phase and quadrature components of a carrier simultaneously, multiplexing two signals onto the carrier*. Image Reject (IR) mixers allow a user to select a signal in a crowded signal environment while suppressing the adjacent image signal, relaxing receiver filtering requirements. Single Sideband (SSB) mixers allow a user to upconvert a signal onto a carrier while suppressing the same image frequency signal, relaxing transmitter filter requirements.

By using quadrature hybrid couplers to manipulate the phase of a signal during conversion, IQ, Image Reject (IR) and Single-Sideband (SSB) mixers enable advanced signal processing capabilities. An IQ mixer allows a system to send twice the information content in a double sideband transmission without using any more bandwidth by using ‘quadrature’ modulation. An IR mixer allows the selection of only one of either the LO + IF frequency or the LO – IF frequency while rejecting the other ‘image’ frequency. This allows for unambiguous signal detection in a crowded signal environment without a tunable RF filter. The SSB mixer is the same structure as the IR mixer and allows the upconversion of an IF signal to only one of the LO + IF or LO – IF frequencies without creating an image of the signal at the other frequency. These mixers are particularly useful when using low IF frequencies, making preselection filtering difficult.

The IQ mixer is the basic building block for higher order IR and SSB mixers. The structure is shown below: 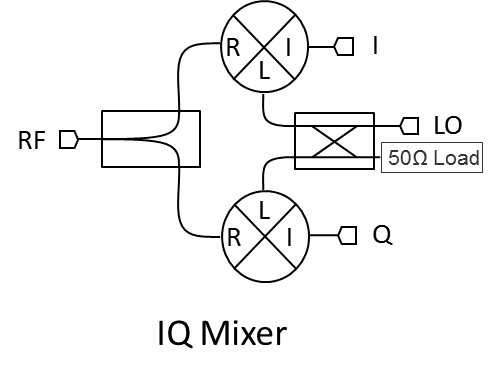 An IQ mixer is actually two mixers with an LO that is shifted by a quadrature hybrid coupler by 90° to each other. In a normal downconversion the phase of the LO is irrelevant because the data is single sided. The IQ mixer requires transmission of both sidebands for accurate reconstruction of the original signal.

An IQ mixer operates on the basis of quadrature modulation, two signals are upconverted into the same block of spectrum in the frequency domain using one LO with either a 0 or 90° phase shift. When the same operation is performed at the receiver in a downconversion, the addition of an extra 90° phase shift will create a complete 180° phase shift, leading to the inversion of one of the original signal components. This will cause the cancellation of one component of the signal, while the other component is reinforced. When an IQ mixer is used as a downconverter it allows both of the original data signals to be retrieved with an appropriately phased LO signal.

Image Reject (IR) and Single Sideband (SSB) mixer are different names for the same mixer, used either as an up or a down converter. They use an IQ mixer as their core, with an extra IF quadrature hybrid coupler. While an IQ mixer modulates both sidebands at the transmitter, and then uses quadrature modulation to selectively cancel one sideband at the receiver, an IR or SSB mixer uses a quadrature hybrid on the I and Q ports to cancel one of the sidebands at the mixer itself. Below is the block diagram of an IR/SSB mixer.

For an IR mixer this means that when a signal is downconverted from Frf = Flo – Fif to Fif, any noise or spurious signals at F = Flo + Fif is rejected by an amount called the image rejection of the mixer. This amount, typically around 25 dB for Marki Image Reject mixers, is determined by the balance of the quadrature hybrids and mixer cores that make up the IR mixer.
An SSB mixer is the same as an IR, but used for upconversion. If a signal is transmitted at Frf = Fif + Flo, then the sideband at F = Flo – Fif will be suppressed by the sideband suppression, generally equal to the image suppression, and also determined by the balance of the passive components. Note that in an IR/SSB mixer, whether the upper or lower image (or sideband) is suppressed in the output depends on the orientation of the quadrature hybrid. In fact, if the fourth port of the quad hybrid is not terminated then the two outputs will provide opposite suppressed sidebands.
IQ Mixer Tuning
It is possible to tune these mixers using a DC offset on the I/Q ports when using this mixer as an IR/SSB mixer with external quad hybrid. In this case the DC voltage applied to the I and Q ports can be positive or negative, and it can be used to tune for improved suppression of the sidebands and carrier suppression. There is a tradeoff in this technique between carrier suppression and sideband suppression, so generally they must both be balanced. It is recommended that customers using this technique do not exceed 20 mA to prevent damaging the diodes.
Phase Modulation
There is a special case of modulation where the IQ ports are DC biased with the intent to change the phase of the LO signal. This technique is called Quadraphase Modulation. This is a special situation because the LO signal acts as the input signal while the I/Q bias signals switch the the diodes. This is opposite the normal configuration where the LO signal switches the mixers while the I/Q signals are converted. For these and all other applications, Marki recommends the use of our MLIQ mixers. These mixers have the best balance and lowest conversion loss for use as quadraphase modulators. For more information about this application, please see the blog post ‘All About Mixers as Phase Modulators‘.
*A previous version of this blog post stated that an IQ mixer allowed you to fit twice the information density in a given bandwidth. In fact the information density does not increase, since both sidebands are required for IQ transmission.
IRIQMixers

How to think about IQ mixersIQ-IR-SSB Mixers