Since we released our BAL-0006SMG (and now BALH-0006SMG) broadband surface mount baluns, we have received a lot of interest in them from people using high speed analog to digital converters, and have wondered why they were so driven to find the best balun/transformer available. Today I figured out why.

Rob Reeder, of Analog Devices has a paper on why phase balance in particular matters for A/D converters. The basic idea is that while an ideal ADC is perfectly linear, an actual ADC has a slightly non-linear transfer function, with some remnants of the second and third harmonics appearing in the output of the ADC. This is the limiting factor in the dynamic range of the A/D, and that is the reason that spur-free dynamic range (SFDR) is one of the most important specs for an ADC. The most significant source of signal distortion is frequently the second or third harmonic, and this is specified on the datasheet.

A differential ADC using a balun/transformer at the front end can cancel out the second harmonic significantly, but only if it is well balanced. Any imbalance, and in particular the phase imbalance, will lead to a significant increase in the second harmonic spur in the ADC output. The phase balance is more important than amplitude, because the distortion due to phase imbalance is proportional to the amplitude squared of the input signal, while the distortion due to amplitude imbalance is proportional to the difference in the square of the amplitudes, which is much lower.

So I took Reeder’s MATLAB code to compare the BAL-0006SMG to a competing 6 GHz balun. Here are the results. First the signal output with the competitor balun (amplitude balance .5 dB, phase balance 12 degrees at around 3 GHz), assuming an ADC that would be second harmonic limited: 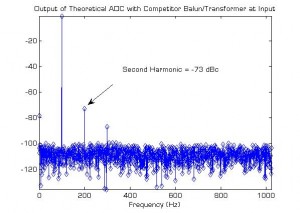 In this case the dynamic range is limited by the second harmonic to 73 dB. Now if we replace it with a Marki BAL-0006SMG at the same frequency, the amplitude balance improves from .5 dB to .2 dB typically, and the phase improves from 12 degrees to 3 degrees typically. This is the result: 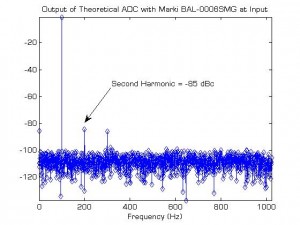 As you can see the spur is reduced to 85 dBc, near the third harmonic. In this case the change of the balun improved the dynamic range of the ADC by more than 10 dB. When high signal sensitivity in broadband applications is critical, the BAL-0006SMG is by far the best choice available on the market today.

Marki Microwave Baluns, Transformers, and Pulse InvertersBaluns
The Problem with Back to Back BalunsBaluns