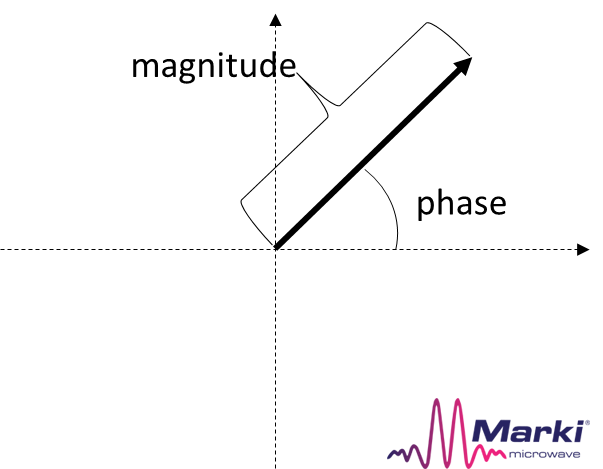 This function can be easily achieved in a laboratory setting by using an IQ mixer. As discussed in the blog All About Mixers as Phase Modulators, an IQ mixer provides separate paths for the in phase (I) and quadrature (Q) components of a carrier. In the IQ mixer structure, these two components are separated by an LO quadrature hybrid, then sent to independent double balanced mixers. These two mixers can be used to convert the tone, but if a DC current is applied then only the amplitude of each component will be modulated. Essentially the LO-RF isolation of each mixer is modified, which leads to decreased insertion loss with increasing current (up to the current handling limit of the mixer). 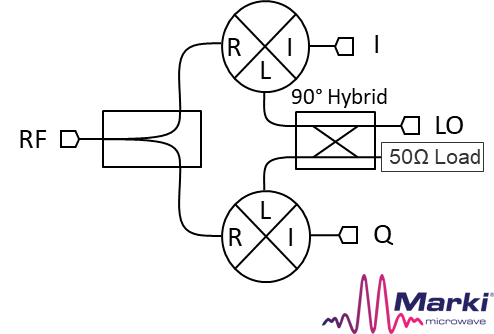 The proper way to apply a DC current to the mixer is through a bias tee. This has the benefit of allowing the high frequency output from the mixer to absorb (in a 50 ohm load) rather than reflect back into the mixer, potentially causing ripple or other degradation to the performance of the IQ mixer as a vector modulator.

In the video Vector Modulator Using an IQ Mixer, we show how the MMIQ-0218LXPC can be connected with two bias tees: the BT-0018 and the BT-0040. These are connected to the I and Q ports (respectively) of the mixer. 50 ohm terminations are applied to the high frequency ports, and then DC clips are attached to the bias tees and to a power supply. 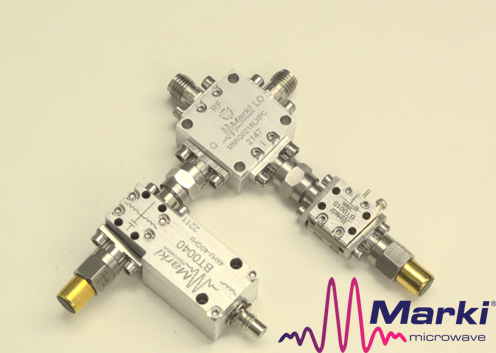 In this demonstration we do something a little confusing. Phase is a relative measurement, so you need to define what 0° phase is by normalizing the phase on the network analyzer. In our case we normalized to the lowest insertion loss point, which is when both biases are set to the maximum allowed current (15 mA for the MMIQ-0218).

You would expect the phase for I+Q to be 45° away from I or Q alone, due to the vectorial addition of the two quadrature carriers. However, the Q insertion loss is higher, so the Q vector is shorter. This makes the vector closer to I, and therefore the angle is smaller than 45°.

We set the network analyzer to sweep a narrow range (11.499-11.501 GHz) to demonstrate how the magnitude and phase can be modified at basically a single point. First, we turn off the Q bias to show how the magnitude of just the I component of the signal can be modified. Note that the I axis is rotated nearly 45° from the origin for the reasons noted above. The magnitude can be lowered to 0 by reducing the current to 0, while the phase remains mostly the same. Then the magnitude is increased in the opposite direction by applying a negative current to the I mixer.

Next, we turn the I bias off and turn the Q bias on. This allows us to modulate the magnitude along a vector that is nearly orthogonal to the original I vector: 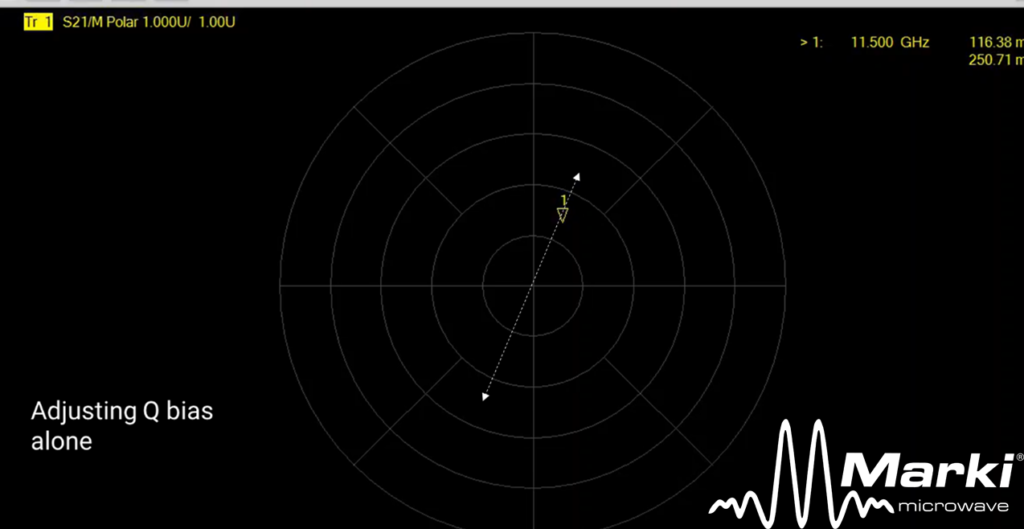 As mentioned above, the insertion loss is higher on the Q side, and therefore the maximum magnitude of the vector along the Q axis is less than that of the I axis. This is what defines the unit circle, or the area in which the vector modulator can reach every point (regardless of the phase). 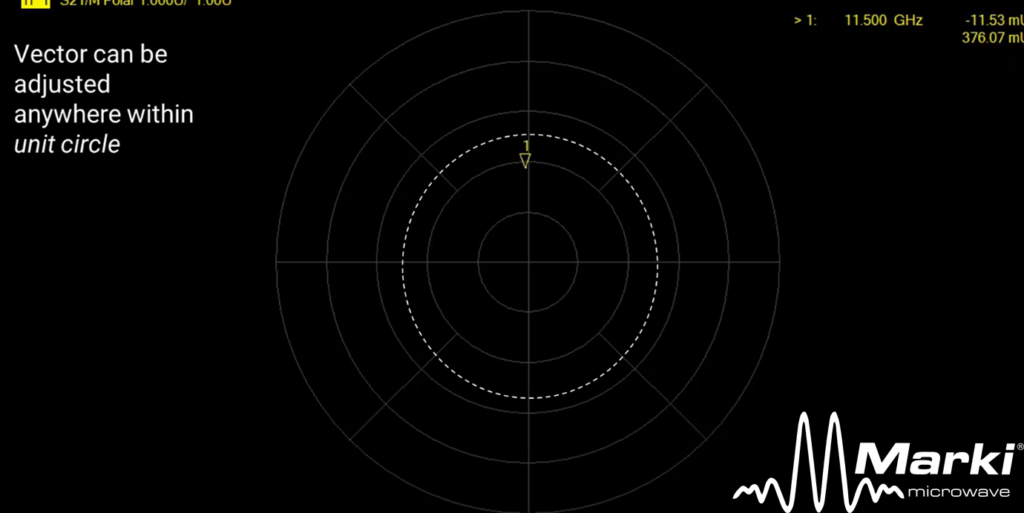 As demonstrated (roughly) in the video, by modifying the magnitude and polarity of the voltage/current applied to the I and Q ports, any magnitude and phase inside the unit circle can be achieved.

It’s worth noting because you are turning diodes on and off to reduce vectorial cancellation inside the mixer, the required voltage/current values are highly nonlinear. 80% of the unit circle is accessible with only 20% of the tuning voltage range, and the last 80% of the tuning voltage is required to get to the final 20% of the unit circle. Therefore, a calibration and lookup table are required to determine what the appropriate voltage settings are for any given point that is desired. In a lab setting, this can be achieved by simply moving the voltages and observing the result on a VNA. In a system, this can be done through a calibration routine.

For more information on IQ mixers and all their myriad uses and quirks, read our IQ, SSB, and Image Reject Mixer Primer. We are always available and eager to read your questions and comments about our product applications at [email protected].