Spectral regrowth is a big deal for you. In order for the wireless revolution to continue apace, enabling you to watch funny cat videos faster in more crowded environments, spectral regrowth must be conquered wherever it occurs. Spectral regrowth is what occurs when a broadband or spread spectrum signal intermodulates with itself, creating deterministic products that look like noise, limiting the signal to noise ratio of the signal. According to Shannon’s theorem this limits the information capacity of the signal, and thus your video takes longer to load (for some reason this always happens at the worst time).

Spectral regrowth comes from a handful of sources. It can come from mixers, but in installed communication systems it tends to come from the power amplifiers at the transmitter and the connections to the antenna itself (called ‘passive intermodulation’ or PIM). It is made much worse by using higher power and by denser concentrations of signals. Both of these factors are increasingly common as data capacity is increased. This is why highly linear amplifiers and PIM are both big buzzwords in the mobile communications world right now.

What is not always talked about is that ‘spectral regrowth’ in the mobile communication world is the same as ‘two-tone intermodulation distortion’ or ‘IP3’ in the microwave world. Two tone modulation distortion is what causes spectral regrowth, just summed over all of the frequencies involved in the signal. This can be seen by moving from two tone testing to three tone testing in a standard double balanced mixer, the Marki M1-0212SA: 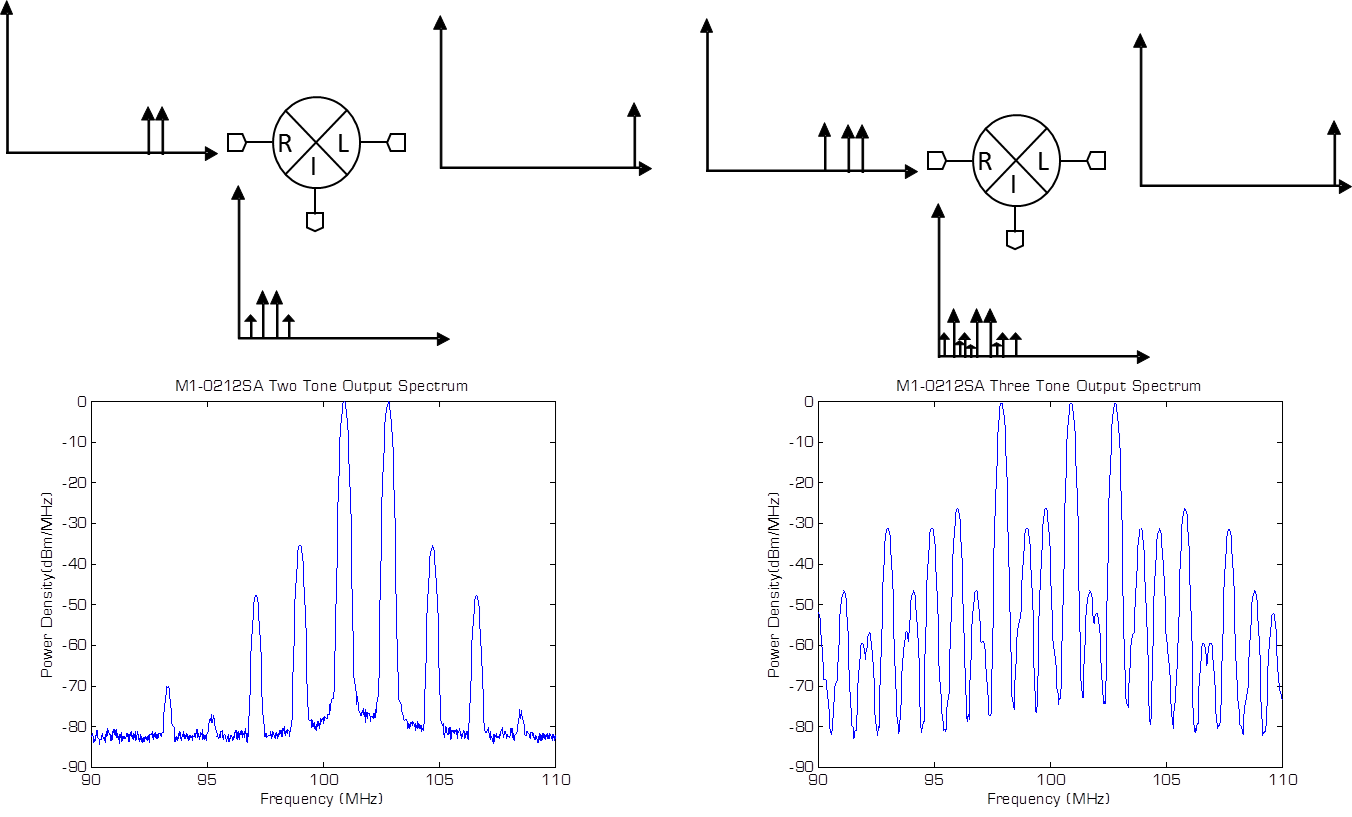 As you can see, it is a complete mess! This is considered very good for a double balanced mixer, and it is better than you would get from any GaAs mixer on the market. This is with 0 dBm output signals and a 25 dBm LO drive (square wave, this will matter in a minute). Note that we use 0 dBm output power as the reference instead of the input power. As we have mentioned before, this is what you really care about as a designer (how much range do I have at the final stage in my receiver) and accounts for the variation in insertion loss between mixers. You can cheat by adding loss to a mixer to improve the input IP3, but you can’t cheat on the output IP3.

This output spectrum is obviously unsuitable for operating with, nonetheless testing a high performance system. The testing system must have at least 20 dB more dynamic range than the system itself, and usually much more, so getting rid of these obnoxious intermodulation products is critical. This was the state of the art for many years, then Watkins Johnson came out with their termination insensitive mixer, the M8TH (still on sale from Ma/com and still considered the standard by some). Here is the M8TH output spectra:

Much better!  The intermodulation products have been suppressed significantly, although they are still significantly limiting the dynamic range to 45 dB. Recently there has been much talk of the FET mixer. At Marki we have not been that impressed with the FET mixer, because of the narrow bandwidth over which it works. Combined with the intrinsic poor isolation available in the FET circuit, this limits the performance below what we like to see. Nonetheless people get excited about it, so here is the narrow bandwidth, poor isolation PE4140 FET quad mixer we built two and three tone results:

Good improvement above the termination insensitive mixer, now the dynamic range is up to 50 dB. At least I guess it is cheap and good for communication applications, but with the narrow bandwidth and isolation problems it isn’t well suited as a test and measurement mixer. Now let’s look at the T3. As a true commutating mixer it is in its element with a 25 dBm square drive. Here are the results:

WOW. Another 10 dB+ of two tone improvement, above the ‘state-of-the-art’, for a 60 dB dynamic range. Here they are together for comparison:

And this is also the mixer with the best spurious suppression, and isolations and conversion loss as good as any mixer available. All of this across a 2000:1 bandwidth ratio. It isn’t fair to say that the T3 is the Ferrari of mixers. It’s more like the T3 is a fighter jet racing a car. When it comes to choosing a mixer for your test system, there really is no choice but the T3.

What is the deal with IP2 in mixers?Mixers
All About Mixers as Phase DetectorsIQ-IR-SSB Mixers, Mixers