This is becoming an increasingly important problem, as recently recognized by the defense advanced research projects agency (DARPA) in their new wideband adaptive RF protection program (WARP). “Sometimes a system’s own transmitter is the biggest interferer to the receiver. To avoid this issue, transmitting and receiving at different frequencies has traditionally been commonplace, aided by the use of a frequency duplexer to keep the two bands separate. However, for defense systems there are a number of benefits to transmitting and receiving on the same frequency – such as doubling spectrum efficiency and increasing network throughput. This concept is referred to as same-frequency simultaneous transmit and receive (STAR),” said [DARPA program manager, Dr. Timothy] Hancock.

One of the main reasons this technique is not preferred is that STAR creates a major self jamming problem for the receiver. In a typical transceiver the received signal will be 80 dB or more below the transmitted signal. However, it is difficult to realize a STAR duplexer with 80 dB of isolation, meaning that the transmitted signal will be stronger in the receiver than the desired received signal. 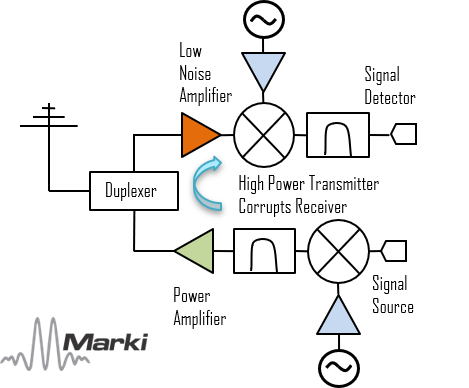 Depending on the exact power ratios, the transmitted signal can be so high in power that it blinds the receiver completely during transmission by saturating the LNA or the mixer.

As mentioned in the previous note, one great way to mitigate this problem is by using Marki high isolation power combiners. These offer up to 35 dB of typical isolation from as low as 300 kHz to as high as 12 GHz. This can ease filtering requirements when signals are frequency duplexed, and it can reduce the self jamming effect in STAR systems. The drawback is the excess power loss and noise floor degradation caused by the insertion loss (6 dB nominally), but sometimes it must be accepted for STAR systems. 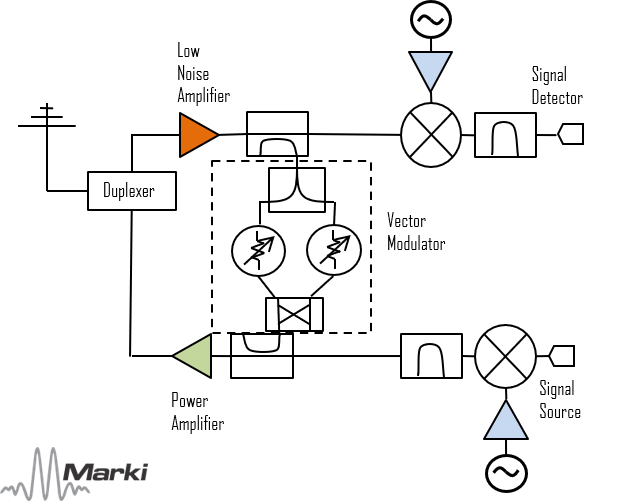 Note that the transmit signal can be coupled off before or after the power amplifier and fed into the receive side before or after the low noise amplifier, depending on system requirements. Coupling off after the power amplifier will give a more accurate version of the transmitted signal (therefore better signal cancellation) at the expense of output power. Performing cancellation before the low noise amplifier will prevent jamming at the expense of degraded noise figure.

In either case the recommended device to tap the signal off is the recently released MC16-0222SM. This surface mount coupler will provide a 16 dB version of the coupled signal with the smallest loss possible in a surface mount form factor.

For the device of the vector modulator itself there are two options:

As requirements become more stringent for electronic warfare and test and measurement applications, we expect to see more difficult STAR transceiver architectures in development. If you have any questions about this application, the most up to date components to use, or the possibility of custom component development for this application, please contact [email protected].