T3 mixers are the highest dynamic range mixer available. They are also handbuilt parts, subject to unit to unit and lot to lot variability. In this blog post we attempt to quantify that variability. Our sample is 10 T3-08LQP mixers from 5 different date codes. All the date codes are separated by at least a month, totaling nearly two years.  Therefore, the variation you see in the plots below accurately represent the variation a designer could expect across two years in the life of their product. Of course there are always outliers, but the following represents typical performance variation. 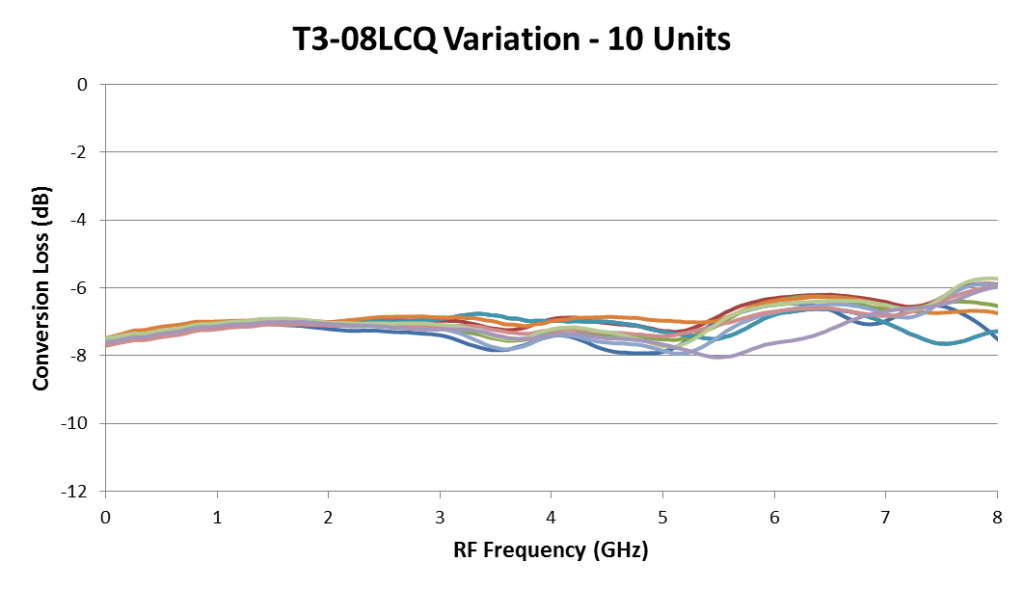 The guaranteed spec for conversion loss is 9 dB for IF frequencies up to 0.5 GHz, and 10.5 dB for IF frequencies up to 4 GHz. Accounting for temperature variation, that means that the conversion loss pretty much has to be better than 8 dB to ship. If we want 95% yield, this is pretty much the spread that we need to have. This also shows a trend: as you go to higher frequencies, the variability increases. We will see this across all of the parameters. 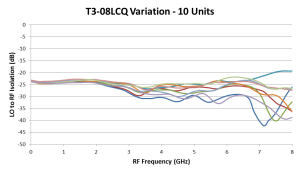 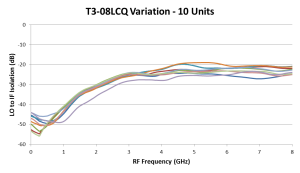 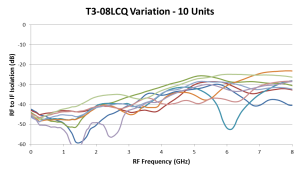 Here we see the same general trend (higher frequencies = more variability), but we also see another trend. This is that at higher rejection values (such as the beginning of the LO-IF isolation) the variability is higher. We also see that the IF rejection (determined by the passive circuitry on the IF, since this is a triple balanced mixer) is more sensitive than the LO or RF circuitry to variability. 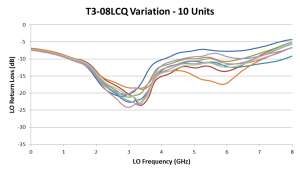 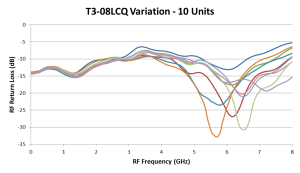 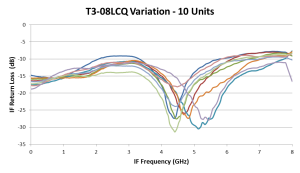 This covers the primary linear parameters, and now we get into the interesting stuff, the nonlinear parameters that really make the T3 unique. First lets look at the IP3 with a normal 20 dBm sine wave LO drive, then with a +10 dBm into an ADM1-0026PA: 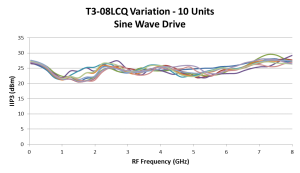 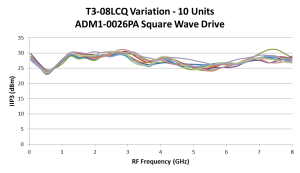 As you can see the variability from unit to unit is fairly low, but it decreases significantly with the application of a square wave drive. The performance also improves significantly. The reasons for the reduction in variability are not clear.

Now lets take a look at spurs. Spurs are tougher, because there are an infinite number of combinations that can be performed. To tackle this problem we usually make a spur table that shows various combinations. Some of these are very improbable to show up in a standard frequency plan (such as the 1 LO x 5 RF) downconversion. The important spurs tend to be along the diagonal, so lets look at the spur variability table for the spurs near the diagonal: 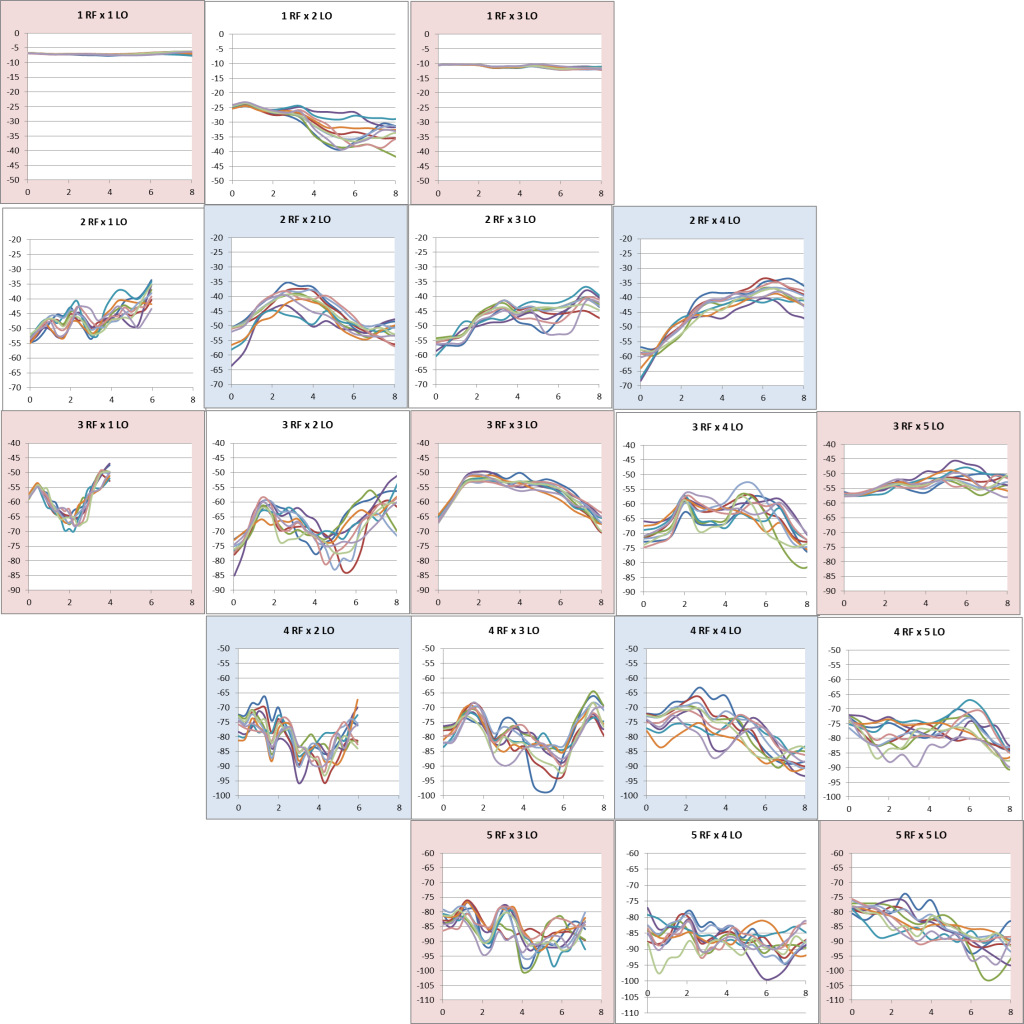 Note the scale on the side. These are scaled to show variability, so each division is 5 dBc, but the max and min limits are different for each row. As you can see this is really a mess, but there are some trends that we can observe. In general the variability increases with frequency, as before, and with higher cancellation levels (60 dBc is more variable than 10 dBc). It also appears that higher order spurs are more variable than lower order spurs, but this could just be because these are lower power tones.

There is also a pattern in these spurs that wasn’t present in previous data. In the chart the odd by odd spurs have a red background, the even by even spurs have a blue background, and the even by odd spurs have a white background. The only spurs not cancelled by balance are the red odd by odd spurs, and they also show the least variability. All spurs besides the 1 RF x odd LO are prevented by the commutating nature of the T3, and most are also canceled by balance. Odd by odd spurs are not canceled by balance . Mixer balance is variable due to the variability in the handmade baluns. The even by even spurs are dependent on the balance in two different baluns, so it is slightly more variable still than the odd by even spurs. In general, however, it is clear that up to 20 dB of variability between units at a given frequency is common, and up to 40 dB between units and across frequency for a given spur is apparent in the 4 RF x 3 LO spur.

Now lets look at the same data, but with a square wave drive from the ADM1-0026PA: 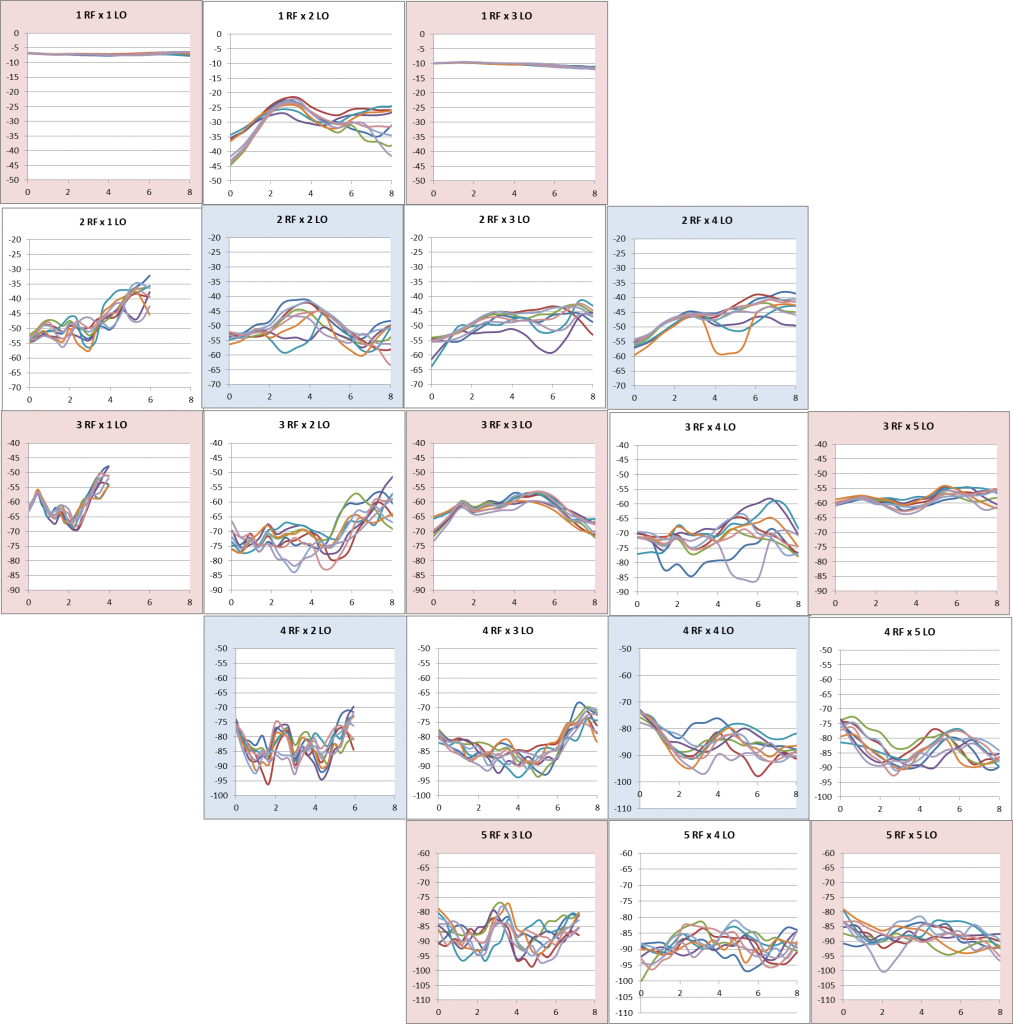 The spurs are definitely improved here, but it is difficult to see a meaningful trend with regards to variability. There are still frequencies where 20 dBc of variability is observed, so certainly we can say that a square wave drive will cause a general improvement, but it is not a silver bullet when it comes to repeatability.

In conclusion, we can make the following rules of thumb for variability, which will apply to all hand assembled microwave components: 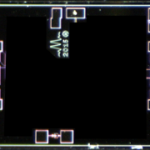 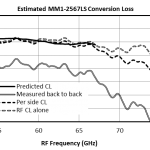