There are two ways to create high frequency (low phase noise) tones: use a high frequency oscillator to directly synthesize (probably optically) or use a crystal to create a low phase noise signal at low frequency, and then use a non-linear element to multiply it up to the desired frequency range. A signal passed into any non-linear element will create all possible harmonics, and can be used as a multiplier. More sophisticated circuitry can be used to improve the three metrics that multipliers are evaluated on: conversion loss, undesired harmonic suppression, phase noise. For amplified multipliers there is the metric of additive thermal noise/noise figure, related to the conversion loss of the multiplier core.

An ideal square wave amplifier produces only odd harmonics, while even harmonics are suppressed as much as possible (they represent duty cycle distortion in a square wave). Even harmonic generation requires rectification. This can be accomplished using a single diode, but with poor conversion loss and harmonic suppression. The preferred technique for producing even order harmonics is to use a standard mixer diode core with passive circuitry in a special circuit configuration.

The basic microwave doubler circuit is the microwave equivalent of a low frequency full wave rectifier circuit. It is shown below. 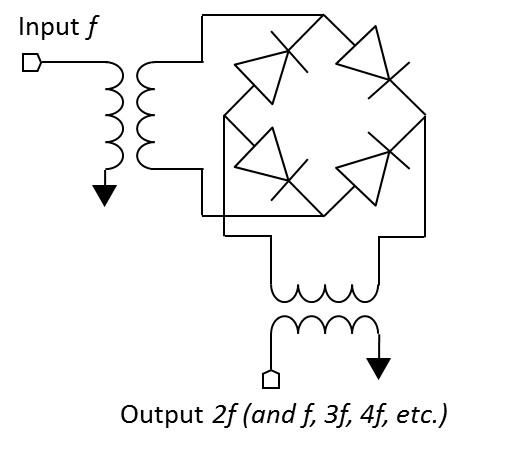 In Marki doublers the hybrid junction is typically a microwave balun, implemented in a similar fashion to our mixer baluns. The baluns perform the important function of canceling odd harmonics, such that only even order harmonics pass through. The balance of the balun determines the cancelation of the odd harmonics and thus the harmonic suppression, while the bandwidth and insertion loss largely determine the bandwidth and conversion loss of the balun.

Odd harmonics appear as a differential signal to the balun, and thus are canceled. This is similar to a double balanced mixer, where even order spurious products are canceled. In this case, however, the input signal acts as both the LO and the RF signals, meaning that a certain threshold level must be met in order to turn on the diodes that make up the ring quad for the doubler core. As with a mixer this threshold is determined by the turn on voltage of the diodes that make up the doubler, and are typically specified as Low, Medium, or Intermediate level diodes. Each doubler operates over a limited input power range for low conversion loss and low additive noise performance. All Marki doublers use silicon schottky diodes, which provide excellent additive phase noise and thermal noise properties.

The time domain operation of a doubler is shown below. In the first scope capture a 1.5 GHz input at 16 dBm is shown.

This is input to a D-0204MA, and the output from this is shown below. Note that the scale is different (10 dB of attenuation is removed, the conversion loss of a typical doubler is 10 dB).

As you can see the frequency is doubled. Since the output is AC coupled, the baseline remains 0V, whereas in a true full wave rectifier there would be a DC component. The wave distortion from an ideal full wave rectifier is caused by imperfect cancelation of odd harmonics (causing the asymmetric nature of the output wave) and the finite bandwidth of the circuit. Note that if the doubler is underdriven, not only will the conversion loss suffer, but the suppression of the harmonics will also suffer, particularly the fundamental leakthrough. This will result in a distorted output waveform, as shown below with the doubler driven at only +9 dBm. 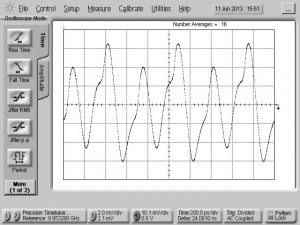 The asymettric waveform is again a result of the unsuppressed odd harmonics.

Generally the output of a doubler is used as a local oscillator downstream in the system. To counteract the conversion loss of the doubler and create a suitable local oscillator an amplifier is typically used after the doubler. Marki amplified doublers offer an application matched amplifier combined with our world class doubler core to provide high output powers suitable for driving a high frequency mixer.

As with mixer outputs, filtering of the multiplier output signal is critical. While the circuit can suppress the adjacent harmonics (i.e. a doubler suppresses the f and 3f harmonics while maximizing the 2f harmonic), it is usually powerless to suppress the higher order even harmonics (4f for a doubler). This means that filtering is required for the application the doubler will be used in. Without the use of a tunable filter this will frequently limit the useable bandwidth of a doubler circuit to a single octave. If a doubler can provide an output of 1-4 GHz then the 4F harmonic will start to leak into the band when it is used below 2 GHz. This is why many of our doublers are limited to octave band. Much broader bandwidth multipliers are available, but they may require switched filter banks at the output to maintain harmonic suppression in the application circuit.

The conversion loss of a basic doubler is limited by the fourier expansion of a full wave rectifier. The coefficients for these are given by