The LO to RF isolation of a mixer is a critical performance specification in most broadband applications. LO feedthrough can not only contaminate a system, but the noise fed from the LO path can degrade a system’s noise figure. The datasheet of a mixer is an important, authoritative source for understanding it’s performance. As broadband industry leaders we at Marki Microwave put immense effort into producing comprehensive, repeatable datasheets. However, the isolations experienced in a real system can vary from the datasheet for several reasons. In this note we will look at the most common reasons: varying LO power, variation over temperature, and unit to unit variation. After reviewing common reasons that LO-RF isolation can vary, we’ll look at an LO-RF isolation in an uncommon way based on a recent customer inquiry we received.

The first rule about mixers is: Thou shalt not starve the mixer of LO drive. When you underdrive a mixer the linearity degrades and the conversion loss increases, but also the isolations (typically) degrade. To elucidate this issue, we took an LO to RF isolation measurement across frequency with differing LO drives on our MM1-0212L: 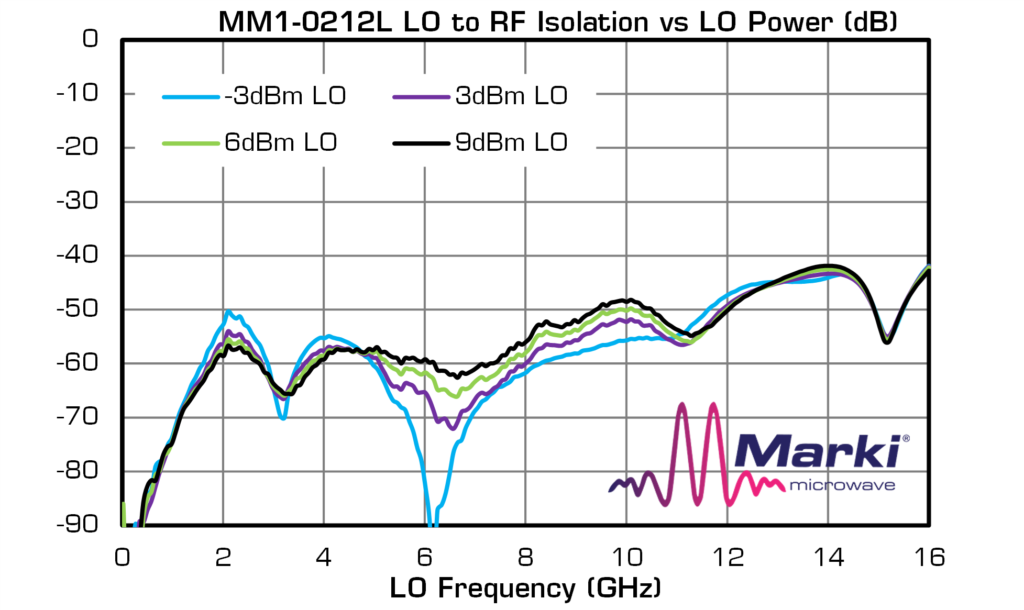 -3dBm is below the MM1-0212L’s minimum 1dBm LO drive but highlights the subtle effects of starving the mixer. A lack of LO drive may look like an improvement like at 6GHz, but the region of operation is visibly narrowing. Further, it can be seen that the impacts of a starved LO will not manifest as a fixed degradation across the entire band.

Next, we looked into how typical LO to RF isolation changes with temperature on our MMIQ-0626L: 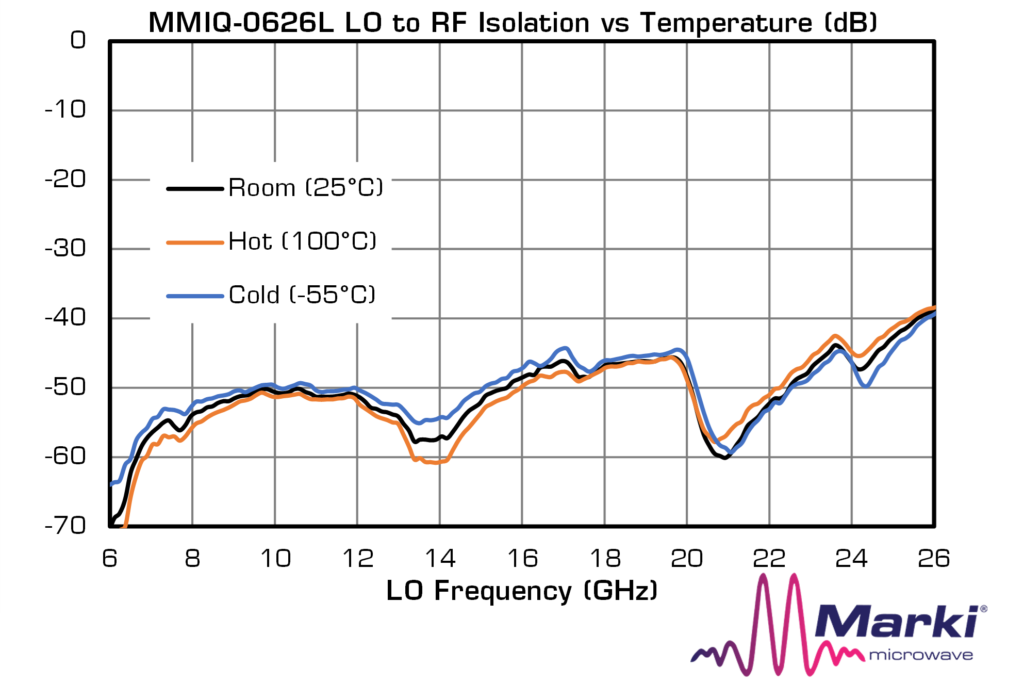 Temperature fluctuations have an impact but are hard to predict because like LO drive the degradation is not uniform for broadband products. It can be seen that certain frequencies like 19GHz almost overlap, but at 14GHz there’s nearly a 5dB difference between hot and cold.  As with power variation we can only say that ‘performance will vary’ without being able to provide a useful rule of thumb for how it varies.

Outside the designer’s control will always be some variation due to fabrication tolerances and, unfortunately, for LO to RF isolation this could be the cause of the largest performance delta. From the Marki Mixer Variability Report the MM2-0530L has the following part to part variation: 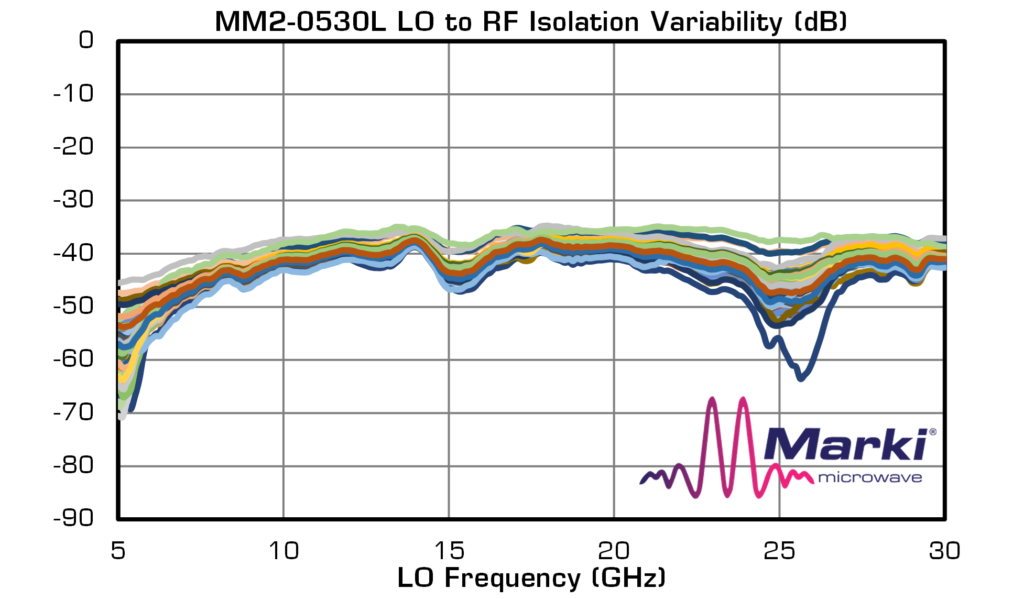 This shows a fairly wide range of variability just from part to part. It also shows that while the performance delta can be quite close at say ~14GHz, it has significantly more volatility at ~25GHz. This directly increases the unpredictability and is additional to the rest of the aforementioned environmental conditions.

A typical LO to RF isolation measurement is performed as an S21 measurement with the caveat that the injected power must be within the recommended LO power range to “turn-on” the diodes. This is how all the above measurements were performed. Recently we had to devise a new measurement when a customer

This customer emailed asking about an upper sideband (USB) upconversion application with an unanticipated noise bump on their lower sideband (LSB) like the following:

To study how the isolation changed at other frequencies, we devised the following experimental setup: 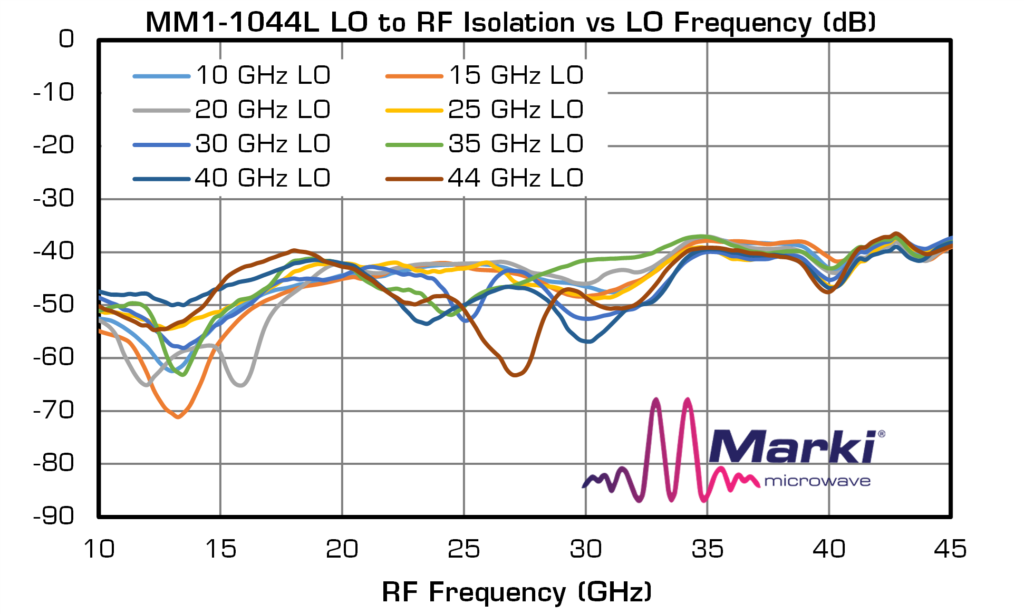 In the plot above the insertion loss (isolation) is measured across the band, through the coupler. A high-power tone (10 dBm) is injected acting as the LO, but the LO frequency is different from the measurement frequency. As you can see the isolation varies significantly depending on the frequency of the LO, but not in a uniform way. Due to the complex impedances of the diodes, it is once again not possible to define a ‘rule of thumb’ for how the mixer will respond to changing LO frequencies. In some cases the isolation varies by as much as 15 dB!

For detailed frequency planning and mixer recommendations we also recommend emailing [email protected] and requesting a spur analysis for your application. We’re always happy to hear from you!