On Tuesday, while we were debating over the theoretical explanations of the mega-high linearity T3 Mixer, Ferenc asked me to answer a seemingly very simple question: when you combine two sine waves with a phase shift between them, what is the output? It was relevant because this is essentially what is happening in a balanced mixer when it cancels intermodulation products. Simple, right? Voltage waveforms (not power) add vectorially, as [c2 = a2 + b2 + 2ab cos[theta]], convert back to dBm, finished. Bada bing bada boom, if not high school algebra than at least undergrad physics. 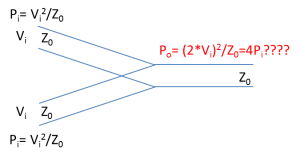 Breaking the laws of thermodynamics usually means that you’ve done something wrong. One of the things that I KNOW (the output power is equal to the input power, the peak voltages add vectorially, the output impedances are matched to the input impedances) must be wrong.

Generally it is best to use these principles to solve microwave and RF problems:

1)      Conservation of power: Power in = Power out, all the time. If you can’t have more power and the extra has to go somewhere.

2)      Impedance is constant: The impedance is the ‘boundary condition’ for the problem, defined by the geometry. Changing the impedance requires breaking Maxwell’s equations, not as bad as

The solution lies in the properties of a three port network. As shown in Microwave Engineering (Pozar, V.2, p. 353), a three port network cannot be both lossless, matched at all ports, and reciprocal. Thus the available three port devices are either non-reciprocal (circulator), lossy (resistive power divider), or unmatched (T-junction). The first doesn’t add power, so that’s out. I don’t have any resistors in my mixer, so this seems unlikely. The input and output impedances must not be matched. As detailed in the Mixer Basics Primer, the balance of a mixer comes from the cancellation of mixer products in the diode circuit, which makes it dramatically more difficult to analyze. Instead we will consider the case for Wilkinson Power Dividers. Resistive Power Dividers are a little different, but the math works out the same way if you just add 3 dB of loss. What happens is that at the point where the voltages combine the impedance is not actually 50 ohms, but is transformed by an impedance transformation. Below you’ll see the results of the experiment I did to confirm my formula. 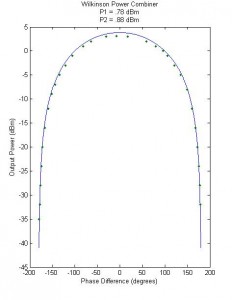 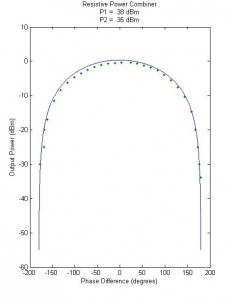 The still puzzling part is where the power goes when the two vectors cancel each other. It is very similar to the creepy interference problem in optics, where you have two waves cancelling each other. In free space the power goes into the non-canceled lobes of the diffraction pattern. In a fiber interferometer the power is transferred into radiating modes that get absorbed by the cladding. Where, then, does the power go in an RF/microwave power combiner?

What is the power handling of this device?Power Dividers