The Nonlinear Transmission Line (NLTL) is well known as a generator of high order frequency multiples with good efficiency and ultra-low phase noise. One major disadvantage of using NLTLs for frequency multiplication and LO generation is that it generates a frequency comb, which includes all harmonics (even and odd) with ideally equal power. This makes filtering for the desired frequency challenging, and limits the tuning range of a synthesizer realized with an NLTL.

In contrast to an NLTL, a typical diode doubler uses a balanced circuit to suppress the odd harmonics. The obvious question is why not use a balanced circuit for an NLTL to achieve harmonic suppression? This technical note discusses such a balanced NLTL circuit. As we shall see, the results are a comb generator that has significantly reduced filtering requirements.

A single ended NLTL chain is shown below. In this experimental setup, a 200MHz signal is amplified with a partially saturated amplifier to both make the signal larger and to shape the waveform into a square wave to improve NLTL conversion efficiency.  Next, a bias tee isolates the RF signal from any DC offset and the resistor to ground sets the DC bias point of the NLTL, which is set to maximize the power level of the resulting spurs.  After the NLTL, a final DC block ensures that only the RF signal enters the measurement equipment.

The resulting frequency domain output is exactly what we had hoped for – a series of high-power spurs at integer multiples of the fundamental tone. 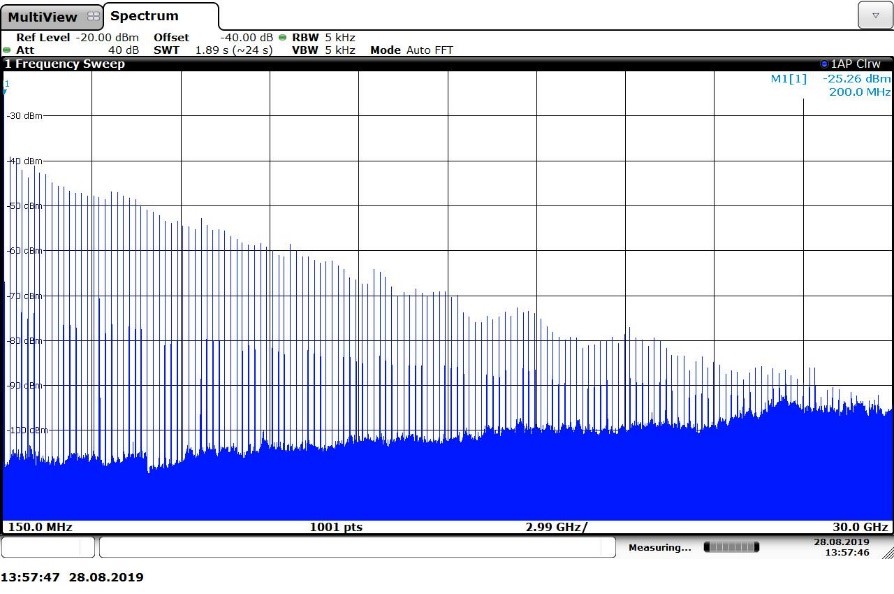 To realize the differential configuration, a BALH-0006 balun was used to split the incoming signal into two equal and opposite signals.  Next, both signals traverse an identical NLTL chain and are combined with a PBR-0006.  This power combiner has high isolation, but it does not combine in phase.  To counteract this a mechanical phase shifter was used to compensate for any slight phase imbalance (unlike a Wilkinson or resistive power divider, which is in phase).  Using a spectrum analyzer, the power combined output of the NLTL was viewed and the DC bias point was tuned for each branch with the potentiometers to optimal performance.  This was determined by looking at the power difference of adjacent harmonics and tuning for maximum odd tone suppression.  The potentiometers set the reverse bias voltage, which in turns determines the amplitude output of the NLTL at each tone. In this way the amplitude balance could be fine-tuned.

This experiment resulted in the following output: 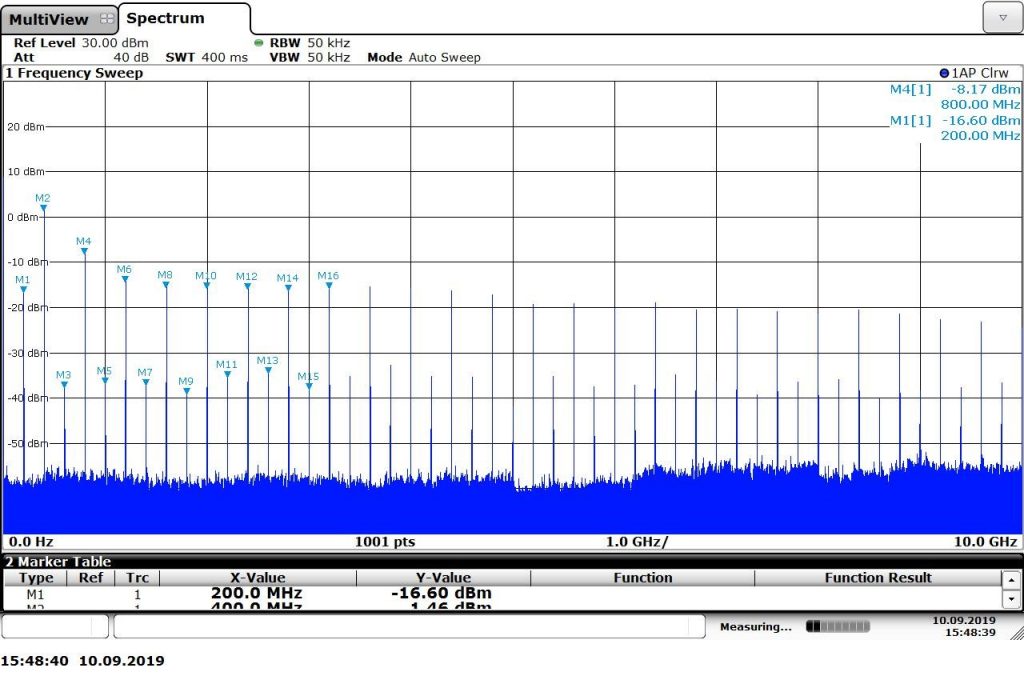 This output shows high powered spurs at every even harmonic of the fundamental due to the 180° phase shift from the balun and the inherent relationship between frequency and phase.  The power levels of the rejected signals however are still quite high and the average suppression of odd tones referenced to the adjacent even tone is ~22dB.  This power level is due to the uncontrolled phase relationship of the PBR-0006 power combiner.  To combat this and increase the suppression, the phase shifter was removed and the PBR-0006 was replaced by a Wilkinson power combiner.  Wilkinson power combiners have worse isolation, but they have the benefit of in phase power combining.  This signal chain and its output are shown below: 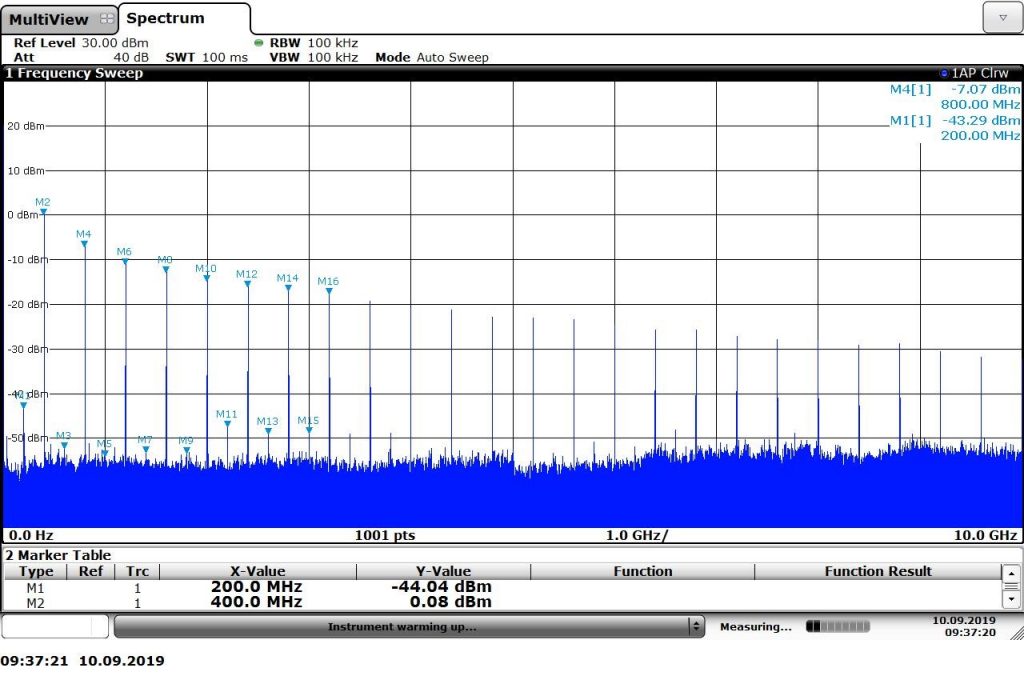 In this configuration, the resultant frequency domain output is significantly better than in the first case and we can see a clear ~38dB average rejection of odd tones with respect to their adjacent even tones across the board.  This superior performance is due to the superior amplitude and phase balance of the Wilkinson combiner, despite the lower isolation.  Since the differential NLTL chain is optimized with the resistors, the amplitude imbalance from the balun and power divider are tuned out, leaving only the phase imbalance as an error source.

How Can I Maximize My Rejection?

Seeing the stark difference an in-phase power combiner makes to the rejection of odd tones brings up the question: what is the independent variable that controls the odd tone suppression?  As explained above, the phase balance of the balun is inherited by the resultant spurs and as the spur order increases to the nth spur, the phase difference between ports is multiplied by n.  If the system is perfectly phase balanced with a 180° phase shift between branches then there will be complete odd tone rejection across the board; however, a small phase imbalance on the output of the balun becomes problematic at high-frequency output tones for this same reason.  As the spur order increases, the two branches stray farther and farther away from the 180° ideal shift which can be seen in the below phasor diagram.

This diagram shows the tone out of the 0° port in red, the tone out of the 180° port in orange and the vectorial addition of the two tones in black.  With perfect phase balance the black tone is fully rejected, however with a slight imbalance, the resultant power combined tone grows quickly as the spur order increases.  Amplitude balance plays a part as well, however the amplitude imbalance doesn’t grow with spur order.  Since the second signal chain offered better phase balance, odd order harmonic cancellation was much more apparent and it seems that the figure of merit for balanced NLTLs is the phase balance between the two ports being combined.  In my experiments I was able to achieve a maximum average suppression level of nearly 40dB with good phase balance.

What Rejection Is Practically Realizable?

This depends on the implementation of the above circuit. As stated, the phase balance is critical, and the amplitude balance is also important for isolations of 20 dB or better. These could be fine-tuned in a surface mount design using a BAL-000XSMG, an NLTL-6794SM (or NLTL-6795SM or NLTL-6796SM), and a PD-0535SM or other Wilkinson power combiner. This remains as work to be done at this point, but we are confident that enough isolation could be achieved to significantly ease filtering requirements.